The release days for Leila Bryce Sin are always a little quieter, but I think her books are a little louder.

The projects we’re currently working on are the Brimstone War Novels. Fun, dangerous books set in the hot desert of Las Vegas with demons and angles and all manner of supernatural creatures fighting and loving until one side wins. 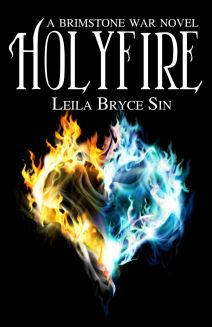 And today the second book in the series released!

In college I took Creative Writing: Poetry. It was a junior level class, but I took it as a freshman, because obviously I was a fantastic writer who knew everything and would ace upper level classes.

Our first assignment was to write a poem. Any poem. Any form. Any subject. No direction or limitations whatsoever.

So I wrote my poem. It was amazing and poetic. The best poetry that ever poeted.

When the prof returned my poem it had a huge “YSO” written across it in red ink. No grade, no comments. Just YSO. Lots of poems in the classroom had this strange notation on them.

The professor, an old Irish poet, grinned back at us and asked how many people had YSO written on their paper. Most of the hands went up.

“Years ago,” he said, “I assigned this same assignment to another class, just like this one. And one of my students couldn’t think of anything to write about. Eventually, he went to his window in the middle of the night to try to think of something, anything to write. And then he saw it. A full moon, bright in the night sky, and he was inspired. So, he set down to write his poem about the full moon, bright in the night sky.”

We all waited as he paused, taking in our faces.

“And the first line of the poem read: ‘Yon sailing orb!'”

And we all burst out laughing.

Dr. Ledbetter looked at us and said, “Sometimes the moon is just the damn moon.”

So when we ever wrote something so over the top, so difficult to understand, so ridiculous that it made him laugh or shake his head (when that WASN’T the reaction you wanted), he would write YSO on our work.

Because sometimes the moon is just the damn moon.