When I was a kid, I was pretty fearless when it came to things that could actually kill me. I wasn’t afraid to climb things or jump off things or slide down things. If it looked like fun, I did it.

I was that monkey child that climbed up doorjambs to the top. I’d get on top of the monkey bars and just hang out. I flipped over and over on the flip bars–tho I guess they were pull-up bars? But what seven-year-old is doing pull-ups on a playground? I climbed rocks and boulders in Red Rock Canyon when my dad took me hiking. I road roller-coasters with abandon–the more upside-down loops the better! I leaned over the railing on top of the Eiffel Tower to look at the river below at age sixteen. These things didn’t scare me.

Then I got older.

I was never afraid of heights but I was always a little bit afraid of falling. But that didn’t stop me from doing things where, had I fallen, dire consequences awaited me at the bottom. When I was fifteen my boyfriend and I went to Magic Mountain and he super wanted to go on the flyer thing. It wasn’t a roller coaster. It was this sort of potato sack thing that was attached to a crane that hauled you up and up and up maybe a hundred feet in the air? Maybe more? Much, much more? Then, at the top, you hit a button that released a catch and you just… Dropped.

You’d fly over the crowd and swoop up and then back, a human pendulum.

I totally did it. But I fucking hated it. My boyfriend loved it. He laughed and pointed out how high we were getting and still going somehow. How tiny people were getting the higher we went. How high are we? Must be three hundred feet?! At twenty feet up I knew I’d made a terrible mistake. I was nearly in tears at the top. When they called out for Bravo Tower to go my boyfriend hit that button with so much glee and I just screamed.

Yes, I was fine and once we were swinging and not dead on the ground, I enjoyed it. But I knew then I’d never bungee jump, like, ever. That boyfriend went on to skydive for his eighteenth birthday.

But I was fine and I could still go on roller coasters and the top of the Eiffel Tower for years to come.

But with each year my fear of falling got a little worse and a little more worse. Until in the last six to eight years it’s really grabbed a hold of me.

That feeling when you fall? That drop in your gut. That weird tingling, horrible sensation at the small of your back? That. That’s what I get now. Not to mention the shortness of breath, the heart palpitations, the need to just close my eyes and wait until it’s over.

If we drive over a very high bridge that arcs, you know what I mean? I have to close my eyes. I feel that sensation in my back and I can see the car just sliiiding off the bridge. I went to the top of the Stratosphere in Vegas once and at the top they’ve designed the floors and windows so you kind of lean to look down. Couldn’t do it. I legit felt like someone was pushing me and I would just go through the window to the sidewalk far, far below. Those videos of people doing stupid shit on the edges of cliffs? Fuck no. Can’t watch. When we hang lights for the holidays and my husband leans over the edge of the roof to reach for something I have to hold on to him and lean back because otherwise I start screaming at him not to fall.

What’s weird though is I can be high up in a building, just don’t angle the windows so it looks like you’ll fall. I can fly in a plane and look out the window and marvel and not have even a tingle. I can stand on the top of our roof, just don’t lean over the edge. Phobias have no logic.

And I never know what’s going to set it off or not until I’m in the middle of something.

This past week our county fair was in town. I’m not a huge fan of it. I mean, I always think I want to go and then I do and I remember how insanely crowded it is and crazy expensive everything is and I hate it. But we got free tickets this year and I kinda wanted to go.

I wanted to see the fireworks and eat some bad food and I wanted to ride the Ferris wheel with my husband and look out at the ocean and hold hands.

So we went. And we ate some incredible Mexican-style corn and the sun started to set and I said we should go to the Ferris wheel before it got dark so we bought tickets and got in line. I took pictures and bounced on the balls of my feet, so excited. I hadn’t been on the Ferris Wheel since I was a teenager.

I hadn’t been on the Ferris Wheel since I was a teenager.

As we got closer to the front of the line I was even more excited because I wasn’t freaking out. No anxiety attacks, no drop in my gut, no tingling in my back, no heart palpitations. I was fine! This was gong to be so much fun! I was going to see the fair from the tippy-top and look out over the ocean and hold hands with my husband and it was all going to be so romantic!

Then it was our turn. The mom and dad and their two children obviously under the age of ten got out of the carriage and we climbed in after them and I sat down next to my hubs and the thing swayed, as it’s wont to do. My back started to tingle. My breath caught.

The wheel started to turn and because they were letting people on we stopped. And went. And stopped again.

I had to close my eyes. I wasn’t holding my husband’s hand, I was gripping his arm with both of my hands, clutching him as the sensation in my back became overwhelming and I felt like I was falling.

“Are you going to be okay?”

When someone has an anxiety or panic attack, they often apologize because we know, we know we’re ruining this for other people, not just us. This was my idea and now I was freaking the fuck out.

They were done loading people and we just started turning. Up and down. Then I realized we were cresting over the top a lot faster and smoother than I thought we would and I was able to loosen my grip on his arm.

“I think I’m okay. I think it might actually be passing.”

After the second smooth revolution, my gut unclenched and I wasn’t panting to catch my breath. On the third revolution, my back relaxed and that anticipation that I was about to fall slowly passed until I could actually, really relax and just enjoy the second half of the ride.

I couldn’t believe it. The anxiety attack passed before the ride was over. I laughed. I almost cried. I’ve learned to just ride out these attacks and get through the activity but this was the first time that I got through it in time to enjoy the activity that brought on the attack.

When we got off the ride I actually jumped up and down and said, “I did it! I got through it!” Even my husband, who has no idea what anxiety like this feels like, knew this was a big deal and he was so happy for me.

Now, I’m not sharing this to tell you to face your fears and you’ll get over them. Like I said, phobias know no logic. I’m just sharing this because it was awesome and such a big deal for me that I wanted to share.

Of course I don’t know when I’ll try something like that again and even if I do, I have no way of knowing if it’ll pass again. But it passed this time and that was fucking amazing. 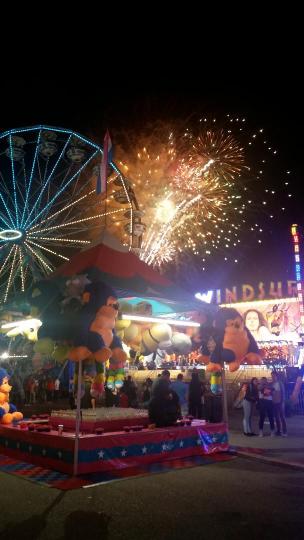