At the end of June I was super lucky to get to see Neil Gaiman read and speak on his last signing tour. 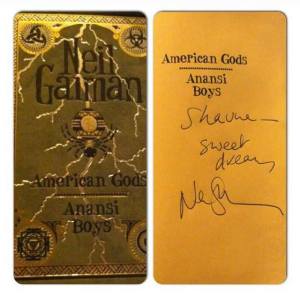 When I heard that it was his very last signing tour I panicked. Meeting Mr. Gaiman has been a dream of mine for many, many years, but tours being what they are, it’s a luck of the draw if the author will come to a city near enough for you to visit (although three girls in line with us had driven six hours from Vegas and were going to turn around and drive right back after the signing!).

I almost got to see him two Halloweens ago when he, and his beautifully talented wife, Amanda Palmer were on the Craig Ferguson Show. I heard about that and pounced, emailing for tickets only to be told they were ALREADY totally booked, but if seats became available, they would let me know. So I hoped and waited. The show emailed me the morning of Halloween, saying, “Please come down! NOW!” Uh, yeah, it was Halloween, arguably my most favorite holiday and the studio was over 2 hours away (and that’s being generous with LA traffic being what it is) and the show was filming within 2-3 hours. To be honest, there was a very good chance I wouldn’t make it there on time, wouldn’t be allowed into the studio and would’ve effed up my Halloween and not even gotten to see the show and Neil and Amanda.

But then this tour came up and the sky parted and the Heavens shined down upon us and the angles sang: Neil Gaiman was coming to Burbank. Burbank is only an hour away. And what was more, he was going to be in a theater, with numbered seats and pre-purchased tickets! Oh, my, goodness, I was so happy.

Now, I’m not going to go into the negative parts of the signing because Mr. Gaiman had nothing to do with or any control over how the theater handled the signing/seating/ticketing. Needless to say, they did a very poor job and by the time we were inside, hundreds of fans were hot, sweaty, sunburned, tired and angry. But! We were going to hear Neil Gaiman speak and get to have our moment with him.

I didn’t blog about my experience at the signing right away because when I thought back to it, I did think of the negative parts, a lot. And that’s not how I wanted to remember this last chance opportunity. 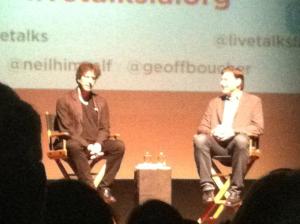 I believe that Mr. Gaiman has actual magical powers because, as unhappy as we all were going in (except for the lucky first six rows that paid double and triple what the rest of us paid to have a cocktail hour and 15 mins with Mr. Gaiman), as soon as Mr. Gaiman spoke, hell, as soon as he took the stage, you forgot that you were sweaty, smelly and sunburned. Neil Gaiman was smiling at us and talking in that perfect accent that he has and, of course, his hair.

(We were all standing outside, staring through the glass doors at the cocktail party and when Mr. Gaiman came in to greet those people, one girl by me gasped and said, “I SAW HIS HAIR!”)

Mr. Gaiman talked and joked and laughed and it was wonderful. He answered our questions, explained bits about the process of writing Ocean at the End of the Lane and even read a lovely, long excerpt from both Ocean and his children’s book coming out in September, Fortunately the Milk (which sounds HILARIOUS by the way and I know a few little ones that will be getting copies for Christmas).

Then he took a break and came back and started signing. Now, we were only six rows back and in the center. SIX ROWS, PEOPLE! And I thought, “Wonderful, we’ll get our books signed and be on the freeway in, like, an hour.” I can’t tell you how wrong I was. It took well over two (read: nearly three) hours before we were on stage, tired but still giddy before my books were sliding across the table to be signed. Yeah, over three hours. 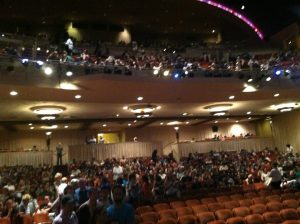 This is how many people were still waiting after 2.5 hours of signing.

When we were outside, we made friends with the people around us and two of those girls were in the “third tier” price section. When we were on the freeway home, I checked Twitter (no, I wasn’t driving) and saw that those two girls were still waiting with six or seven rows ahead of them still to go. If I remember right, I saw Mr. Gaiman tweet in the late night/early morning hours that he was finally done – we had been home for a few hours by then.

Since that signing, I’ve read a couple of blog posts from others at his other signings and I realized I kinda messed up my experience. At every single stop, Mr. Gaiman signed hundreds, if not a thousand copies of books for people to simply take (they were included in the cost of the tickets), if they didn’t want to wait for the actual signing. He promised to sign as many copies of Ocean as you wanted, plus one more item, whatever you wanted. How many books that meant, at just one stop, didn’t really sink in for me and I regret that.

The talk and the readings were so wonderful, I really should have just taken my books to the front of the theater and switched them out for signed ones. Yes, I wanted something personalize, yes, I wanted that one moment where Neil Gaiman smiled at me and only me and I wanted him to write my name in my collector’s edition of Anansi Boys and American Gods and scribble, “Sweet dreams…” Yeah, I wanted all that, but I didn’t need it and if it had really occurred to me the physical toll that he was going through, I wouldn’t have.

(Now, if I could’ve snuck around the table for a hug, I would’ve waited all night!) 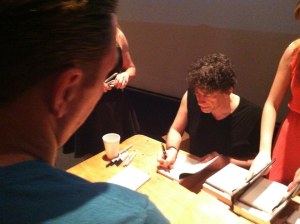 By the time we reached the stage, he’d already taken one break and they’d set up a fan for him (another horror of the theater: 100* outside, but no AC, not even for Neil Gaiman) and he’d had to take his jacket off and roll up his sleeve on his writing arm. My husband glanced back at me and said, “Oh, god, look at him. The poor guy.” That moment I wanted to

run off the stage and not let him sign my books because I didn’t want to add to his toil, but they already had my books on the table and they were moving toward him, so I followed.

One of the posts I’d read the other day was written by a volunteer at his Toronto signing, and she talked about how she had to give him a band-aid out of her purse so he could keep his thumbnail on. Read that again. That is how much this man has been signing, just signing, books. He is losing his nails.

Mr. Gaiman, I understand first hand why this is your last signing tour. I am terribly sorry I added to that toil.

If you missed this tour and are sad, don’t be. Yes, it’s awesome to have something signed and to have that moment, but let me tell you, just getting to see him in person, hear him talk, joke and laugh is enough. And even if it wasn’t, to get to hear him read from his own books will be. Don’t be sad he isn’t doing another signing tour, because one more just might cost him those amazing hands (did you know he hand writes every book and then transcribes it onto the computer? Amazing!). You’ll still have an experience, trust me. And it won’t be stained with the exhaustion of waiting in line for hours, your back hurting and your feet aching. You’ll look back and just remember what it was like to hear Neil Gaiman speak. It will be worth it.

So, Mr. Gaiman, I am sorry we have loved you so violently, but thank you so much for what you do for us, the books,

the talks, the moments.

I will always treasure my moment with you.